Watercolour and pencil on paper

During his stay at Rome as director of the Villa Medici, Balthus abandoned the work on canvas and opted for the one on paper. At that time, he accomplished several still life and floral compositions that emphasized once more his masterful handling of colours, his attention to detail and his need to contemplate the motive for a long time, in order to grasp its essentials, bring them to life.

In the Still Life with Fruit presented here, the tribute to Paul Cézanne is obvious. As Balthus recounted: “I precisely remember a trip I made at the age of five with my parents in Provence; one word dominated the conversation that I remembered and never left me: Cezanne. Cezanne ... that word was pronounced like a talisman, a password, a magic spell. Rightly, when I was old enough to discover his painting, it seemed to me so new and had the ability to reach the secret nature of things […]”.

As for the practice of watercolour, Balthus follows the path opened by the great master: development of volume through clear but delicate outlines and subtle variation of colours; primacy of the subject in the composition, the background being summarily treated; willingness to highlight the inanimate with the same care, almost the same affection as for the living. As if he wanted to distance himself from this so majestic, almost overwhelming Cezanne’s shadow, however Balthus chose his own fruit: peaches, bananas, grapes, mirabelle plums and apricots make us leave the south of France for the greater mildness of the Roman climate. The predominance of yellow illuminates the composition with the same warmth as orange-red in Cezanne. As for the perspective, it is slightly suggested by a plate corner on which a jug of water is placed, being summarily but effectively depicted. 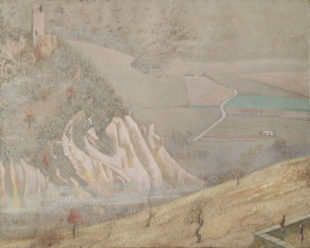 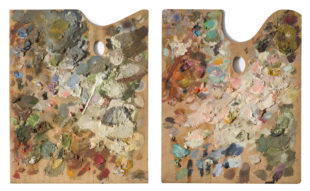