Among the real or imaginary animals that François-Xavier Lalanne carried out, rhinoceros occupies a special place. Being the largest mammal on land after the elephant, it had already attracted the interest, a few years earlier and in various fields, of Eugène Ionesco and Salvador Dalí.

For Lalanne, rhinoceros constitutes his main inspiration in order to marry for the first time in 1964 sculpture and furniture. Thus, the borderline between an artist’s and an artisan’s work becomes even more indistinct. The whole, made in brass and crafted with leather here and there, with nickel silver, with parchment, even with a real rhino horn, summarises the working technique that the artist would opt for henceforth: the metal’s hammering and the use of a welding machine. Rhinoceros will be subsequently represented in the same rigid position and with all the possible uses and techniques many times. In any case, Lalanne made sure to simplify as much as possible the curves being the main feature of the animal’s morphology, conferring upon it an imposing bearing without being weighty and perfectly rendering its wise, venerable look.

The version presented here is a small bronze with black patina made in eight copies in 1978. Although Lalanne did not refuse to experiment with new materials such as polyester, he always remained loyal to the so called traditional techniques. Thus, bronze with black patina reveals with grace and precision the contemporaneity of this rhinoceros. It is not a question of faithfully reproducing the animal’s morphology; it is rather a question of revealing what Constantin Brâncuși defined as “the spark animating his spirit” . 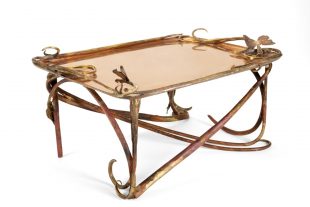