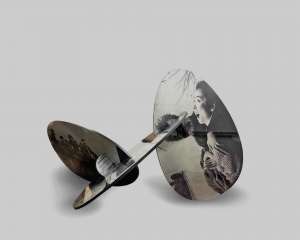 A multidisciplinary project by Andrew Levitas, inspired by the photographs of W. Eugene Smith

The Basil & Elise Goulandris Foundation, particularly sensitive to environmental issues, is very happy to host the multidisciplinary project Minamata, by distinguished director and artist Andrew Levitas, in October. Focusing on the environment and humanity’s relationship with nature, the project includes the avant-première of Andrew Levitas’ biopic Minamata, a sculpture installation, a Filmmaking Masterclass conducted by Levitas and a discussion, the latter being part of the Discussions at the Museum series.

The source of inspiration behind the entire project was renowned American photojournalist W. Eugene Smith, widely regarded as the master of the photo essay. In the 1970s, Smith, armed with his camera, documented the devastating effects of industrial pollution caused by the Chisso Corporation in the Japanese town Minamata. The photo essay he published in 1975, together with his second wife (Minamata – A Warning to the World), played a key role in highlighting the serious health problems the local population was suffering from and subsequently bringing justice to the victims.

The story of Minamata, as well as its approach through the camera of W. Eugene Smith, had a powerful impact on artist and director Andrew Levitas. Deeply affected by Smith’s work, Levitas initially wrote poems and produced paintings inspired by the story, before his project reached its final form with the creation of the film Minamata and then with his metal sculptures.

A restless spirit just like Smith, Levitas is worried about humanity’s relationship with nature and the environment and feels the need to fight against injustice, through his art.

On Wednesday October 20, the Basil & Elise Goulandris Foundation, in collaboration with Odeon, will host the avant-première of Andrew Levitas’ biopic Minamata. The film stars award-winning actor Johnny Depp, who gives a powerful performance portraying Smith’s three-year struggle to raise awareness of the illnesses and deformities the local population was suffering from as a result of mercury poisoning.

The movie, which was first presented at the 2020 Berlinale, will be screened at the B&E Goulandris Foundation’s Amphitheatre in the presence of Andrew Levitas, who has also co-written the script, together with David Kessler, Stephen Deuters and Jason Forman.

Due to limited availability, as a result of the public health measures, the avant-première

of Minamata will be by invitation only. The film will open in Greek movie theatres on Thursday, October 21.

The sculpture installation, which according to the artist is the final part of his project, will go on display at the B&E Foundation’s temporary exhibitions area from October 21 through November 28, 2021.

Focusing on alunimum, a material that is recyclable and can stand the test of time, Andrew Levitas’ seven large metal sculptures highlight the ambiguity, the duality and the contradiction that define man’s relationship with nature and mankind’s technological advancement. The artist feels the need to create works that respect and worship nature, while always taking human intervention into account. Metal, especially aluminum, prevails in his work as it represents both the progress of mankind and prosperity, as well as the ways in which man destroys nature.

Photography also plays a key part in Levitas’ sculptures, as through his Metalwork Photography®, a method he developed at a young age, he transfers photographs on to the metal sheets that form the surface of his works.

Marie Koutsomallis-Moreau is the curator of the installation.

At the same time, from October 21 through October 24, Andrew Levitas, as artist-in-residence, will conduct a Filmmaking Masterclass titled The Artist’s Mind, which is based on the course that he teaches at the NYU Gallatin School of Individualized Study. It is addressed to students and professionals who are active in arts, filmmaking, photography and theatre, as well as anyone seeking to expand their knowledge and experiment with art and filmmaking.

The Masterclass will feature thematic discussions, presentations by Andrew Levitas and interventions by guest speakers - such as the film editor of Minamata Nathan Nugent - as well as multidisciplinary exercises. Participants will have the opportunity to explore all different stages of the creative process through a variety of artforms.

Following the completion of the Masterclass, participants will have one year at their disposal to make their own short film, which will be screened at the Foundation’s Amphitheatre in September 2022. Certificates of attendance will also be given.

Discussions at the Museum

Finally, a discussion titled Environmental awareness through art will take place on Sunday October 24 at 19:00 as part of the Minamata project, with the participation of the Executive Director of the A.C. Laskaridis Charitable Foundation Dr. Angeliki Kosmopoulou, director Lefteris Haritos and Andrew Levitas. Radio producer and Managing Director of the ATHENS 9,84 radio station Margarita Mytilineou will coordinate the discussion.

Special Screening Ahead of the Official Avant-Première | Tuesday, October 19

Discussion and guided tour by the artist | Saturday, October 23

B&E Members will have the opportunity to meet Andrew Levitas, talk to him as well as enjoy a guided tour of the sculpture installation by the artist.