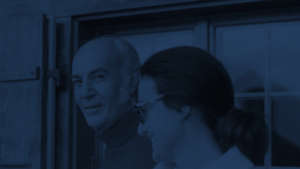 Basil Goulandris was born on Andros on 6 September 1913. He was a descendent of the Goulandris shipping family from Andros, the son of Petros I. Goulandris and Chrysi Dampasi.

Following tertiary education in Greece, he studied Law in Switzerland and, in the late 1940s, settled in New York where he undertook to running of the family’s shipping businesses. For a number of years he served as Honourary President of the Union of Greek Ship-owners and member of the Board of Directors of the American Bureau of Shipping.

Apart from a successful shipping businessman he was, alongside his wife Elise, a lover of the arts, particularly the fine arts. Together they visited museums and exhibitions, sponsored cultural events and supported a number on mainly young artists at the start of their career. He developed particular bonds with business and cultural circles contributing to the development of cross-cultural relations and exchanges between Greece and France.

In 1981 he was honoured by the French State with the title of Knight of the Legion of Honour (Chevalier de la Légion d’Honneur) and in 1986 with the title of Officer of the Legion of Honour (Officier de la Légion d’Honneur), while in 1983, the French Ministry of Culture awarded him the medal of Commander of the Order of the Arts and Letters (Commandeur de l’ordre des Arts et des Lettres). In Greece he was awarded the Cross of the Commander of the Order of George I in 1956, the Silver Medal of the Academy of Athens in 1981 and the distinction of Archon of the Ecumenical Patriarchate in 1992.

Elise Goulandris, nee Karadontis, was born in Athens in 1917. She was the fourth of the six children of Petros and Evanthia Karadontis, who came from Kynouria in Arcadia.

Elise, endowed with beauty and intelligence, and charmed by Art from a young age, from an early age expressed her desire to surpass the narrow expectations that middle class families of her time had for their daughters. Having completed her tertiary education in Greece she travelled to the United States to continue her studies.

In the late 1940s she met Basil Goulandris, also an art lover, by whom she was charmed, finding in him not only an ideal partner but also an intellectual guide in her initiation into the fine arts. In America, where they lived for many years, they developed their social and cultural activities, which they continued later once they settled in Paris and Switzerland in 1956.

In recognition of her contribution to French-Greece friendship, the French State awarded her the highest distinction of Commander of the Order of the Arts and Letters while in 1981 she was awarded the Silver Medal by the Academy of Athens.

Painting (mainly of the École de Paris) was the object par excellence of their interests, connecting them to the artistic circles of post-war Paris while at the same time, by using their heightened artistic senses, they promoted young Greek artists, helping them to evolve their art and expand their artistic horizons.

Establishment and aim of the Foundation

The Basil and Elise Goulandris Foundation was established in 1979. It is a non-profit organisation whose main purpose is the operation of the museums on Andros and now in Athens, as well as the promotion of the visual Arts at national and international level.

Inspirers and sponsors of this effort were the late Basil and Elise Goulandris, who were known for their passionate love of the arts. They envisioned a lively cultural organisation, on a par with internationally acclaimed establishments in the field of the visual arts.
Through the Foundation that bears their name, they bequeathed three innovative museum spaces to Andros, Basil’s birthplace; the Museum of Contemporary Art (in 1979), which exhibits works by Greek and foreign artists, the Archaeological Museum (in 1981), whose construction they funded as a bequest to the Greek state, and the New Wing of the Museum of Contemporary Art, where international exhibitions by renowned artists have been taking place every summer since 1986.

Their vision included the creation of another museum in Athens, in order to provide the opportunity for a wider audience to come into contact and become familiar with the Art they so loved. They both passed away, Basil Goulandris on 27 April 1994 and Elise on 25 July 2000, without unfortunately having seen their vision realised. However, they generously bequeathed all the means for their vision to, one day, come alive. The Athens museum is now complete, 25 years after the death of Basil and 19 years after the death of Elise Goulandris, heralding the beginning of a new chapter for the Foundation, whose aim is, in parallel to the Museum on Andros, to promote this new hub into a vehicle for the development of innovative cultural activities by exploiting contemporary museum applications in the field of modern and contemporary Greek and international art.