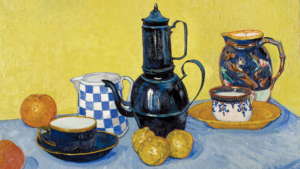 In the context of the exhibition Classics of Modern Art, held at the Museum of Contemporary Art, Andros of the Basil and Elise Goulandris Foundation, some of the greatest artists of Modernism with highly significant works, produced during the most mature moments of their creative careers, were presented for the first time in Greece.

The aim of the exhibition - apart from the aesthetic pleasure involved - was to enable both the visitor and the reader of the fully illustrated catalogue to form an idea about the ways in which painting shifted from a traditional, objective representation of external reality to a subjective rendering of a personal view, right up to refuting the traditional canvas painting itself.

The exhibition catalogue was published in both Greek and English editions.

[…] In all, a magnificent group of top quality works, capable of introducing anyone - ignorant, young or adult - to the art of modern times. The catalogue has been produced to the same high standards. […]

The masterpieces of Andros. The Classics of Modern Art exhibition was inaugurated in the Museum of the Goulandris Foundation
Nikos Xydakis, I KATHIMERINI - 1999

[…] In Andros, Classics of Modern Art, colours and sensations, the road of painting, a rare panorama; Cézanne, Gauguin, Van Gogh, Toulouse-Lautrec, Picasso, Miró, Kandinsky, Bacon, Pollock, Balthus, in the Museum of Contemporary Art. No one should miss it. […]

The Goulandris Museum of Contemporary Art hosts nineteen great artists that have marked our century. The best reason to visit Andros this summer. […]

[…] The most unlikely venue for a major art exhibition in 1999 was without question the Greek island of Andros, where Classics of Modern Art (Basil and Elise Goulandris Foundation, Museum of Contemporary Art, Andros) took place. It is to be hoped that at least some of the sun-worshipping tourist population took time off from the beach to admire the superlative Cézannes, Gauguins, and Van Goghs, none of them from public collections, on offer.