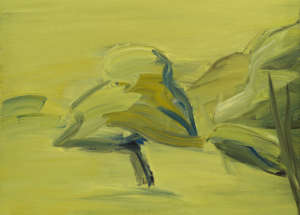 This retrospective tribute to Dico Byzantios is a due debt of remembrance to the illustrious painter of the diaspora who distinguished himself in the Parisian art scene for over half a century.

The son of the painter Pericles Byzantios, he was raised in a family environment that influenced (his future choices), his intellectual and artistic pursuits in a number of ways. Aged 16, he was accepted at the ASFA.

In December 1945, he was forced to expatriate in order to avoid the vortex of the fratricide divisions of the civil war. He was the youngest among the two-hundred Greek passengers of the legendary transport ship Mataroa, whom embarked on a journey towards freedom of thought thanks to a French government scholarship and at the intervention of Octave Merlier and Roger Milliex, two philhellenes of the French Institute in Athens.

In Paris, which was destined to become his second home, he immediately felt the warmth and guidance of the hospitable circle of Dimitris Galanis. He soon became friends with Alberto Giacometti and, over time, with artists such as P. Soulages, S. Poliakoff, Vieira da Silva and others.

During his artistic career, there were three important work circles:

His works are included in the collections of the largest European museums. The French government, wishing to highlight his contribution to art and considering him an important representative of the École de Paris, awarded him top honours including Knight of the Legion of Honour (Chevalier de la Légion d’Honneur) and later Knight of the Arts and Literature (Officier des Arts et des Lettres).

Kyriakos Koutsomallis Curator of the Exhibition