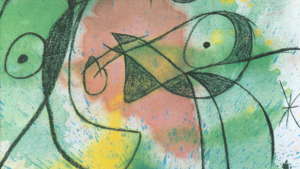 In the Orbit of the Imaginary

In the Orbit of the Imaginary

An exhibition of works by the great Spanish painter, sculptor and engraver Joan Miró (1893-1983). Even though Miró was one of the key Surrealist figures during the first half of the 20th century, he developed at the same time his own, distinctive personal painterly style which he expressed even more intensely after the second World War, when he had been established as an artist and was searching into new artistic paths. This post-war, and in particular post 1957, style stands out for Miró's love for colour combined with a poetic use of pure line, his inventiveness and humour regarding the use of found objects in his sculptures, and his faith in nature and life in general.

Ninety-two works (oil paintings, sculptures, works on paper, prints, as well as one tapestry) were presented in total. The exhibition covered the greater part of the oeuvre of Joan Miró and concentrate in the post 1957 period, when being now a mature artist, created until the end of his life, in his new large studio in Palma, works which brought about a great break with his earlier phase. Common features in all his creative course nevertheless remain his directness, inventiveness and humour, as well as his ability to create his own personal imaginary world.

The works presented in the Joan Miró exhibition were lent by the Fondation Maeght in Saint-Paul-de-Vence (France), the Fundació Joan Miró, in Barcelona as well as by European private collections. A rich photographic documentation together with a comprehensive chronology covering the whole life of Joan Miró introduced visitors to the main exhibition.

The exhibition was curated by Mr Jean-Louis Prat, Director of the Fondation Maeght, connoisseur of the work of Miró, with whom he had the good fortune of collaborating when Miró used to stay for long periods in Saint-Paul creating works especially for the Fondation Maeght and supervising their installation there.

A particularly meticulous and informative catalogue, of excellent design and printing quality, accompanied the exhibition. It contains colour reproductions of all the works, essays by K. Koutsomallis and Jean-Louis Prat, an anthology of Miró's writings and interviews, a detailed chronology of the artist's life and work, as well as a selective bibliography. 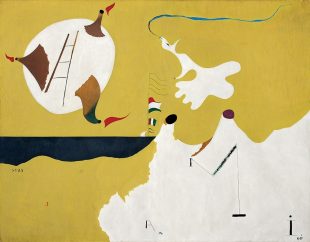 Daring. Fantastic. Free.Simple. Authentic, full of humour, tense colours and endless different materials. It is the world of "deliberate disorder" of Miró, as marked through his artistic creations. 92 of them are presented to the Greek audience in the exhibition "Joan Miró - In the Realm of the Fantastic" which is hosted at the Museum of Contemporary Art of the Basil and Elise Goulandris Foundation in Andros. […]

Works which make you dream, creations full of freedom and audacity of the "artist of lyrical non-descriptions" Joan Miró. Are on show from last week (until the 22nd of September) at the Museum of Contemporary Art of the Basil and Elise Goulandris Foundation in Andros. Every year during this season, the opening of a new exhibition at the Museum of Andros proves to be an opportunity to escape into an artistic world of high quality. […]

The primacy in the visual arts this summer is held by the exhibition "Joan Miró - In the Realm of the Fantastic" at the Museum of Contemporary Art of the Basil and Elise Goulandris Foundation in Andros which lasts until the 22nd of September. Such events do not happen very often in the Helladic country. […]

In the Shadow of a Miró
Giorgos Toulas, ANGELIOFOROS - 2002

Joan Miró is without doubt one of the "sacred beasts" of the art of the previous century. In the history of evolution he has a primary position because of his inventiveness, the versatility his proposal, the multifaceted craftsmanship and the audacity with which he incited his own deep breach within the visual measures.
The Basil and Elise Goulandris Foundation in Andros is organizing this summer, for the first time in Greece an exhibition with works by the major Spanish painter, sculptor, engraver Joan Miró (1893-1983) with the title "Joan Miró - In the Realm of the Fantastic".