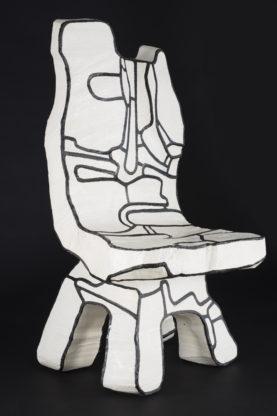 Jean Dubuffet enjoyed to evoke “cycles” in order to define the various stages that marked his process of creation. Among these “cycles”, the one that is distinguished by its longevity and especially its reputation is L’Hourloupe (a word invented by Dubuffet himself), which was the artist’s main occupation from 1962 to 1974. The creation of the Hourloupe is absolutely spontaneous: while talking on the phone, Dubuffet distractedly let his red ballpoint pen roll on small pieces of paper. These exercises resulted in semi-automatic drawings that the pen crossed out with red and blue lines. The painter cut out these indeterminate compositions and soon realized that they began to change and as soon as he put them on a black background, they continued to change, to make sense. These indefinite curves, crossing each other, twist, intermingle, make the abstract and the figurative coexist in a completely new way.

Very quickly, the two dimensions were not enough for Dubuffet to express what L’Hourloupe represented in his eyes. Like many artists at the time, he made use of new synthetic materials such as polyester, expanded polystyrene and epoxy resin in order to give a certain shape to his ideas. Light, easy to handle, inexpensive, these materials they gave him the opportunity to start with reliefs and, later on to carry out his first sculptures. He cut polystyrene alone over and over again and accumulated the shapes, figures and objects. The ridges formed by the multiple cuts were then highlighted with black paint, reproducing in three-dimensional space the twisted curves of the flat surfaces. Certain works, mainly in epoxy resin, were left intact, white and black. Others, made in polyester, were brightened up with blue, red and diagonals.

The Chair of practical function was created in one single day, on March 29, 1969. It belongs to a set of various objects, common in Dubuffet’s universe, in order to “undergo” the transformations of L’Hourloupe. In some cases, the artist enjoyed granting titles both ironic and pleasant, as for the chair presented herein, the principal function of which is obviously not the practical one. Nonetheless, we must not look for causticity in his approach, as Dubuffet’s art is mainly characterized by this balance between simple and complex, figurative and abstract.