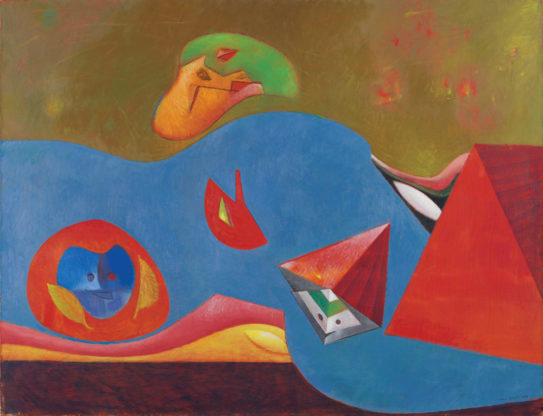 While the Earth Sleeps

In 1946 Max Ernst settled with his wife, the American artist Dorothea Tanning, in Sedona, a small town in Arizona. Ernst built their wooden house and studio alone. Apart from painting and sculpture, he was interested in the culture of the Indian tribes. The work While the Earth sleeps was carried out during the last winter they spent in Arizona.

The paintings of that period are simplistic, almost childish at first glance, worthy heirs of the surrealist period. On closer observation, their lightness is gradually lost to leave room in a world completely created in imagination.

By approaching While the Earth sleeps, obviously influenced by the poetic title of the work, we are probably imagining a landscape of bright colours as a tribute to winter rest. This hibernation is on no account a carrier of infertility, as implied by the numerous curves reminding of a pregnant woman. The blue volume in the centre seems to take many forms, as a protective fluid. It is interesting to observe that the brown colour, which we could assimilate to the Earth, has been added over the blue, which could logically identify it with the sky. So, is this really a landscape, as we originally assumed, or something completely different? The red colour gives the answer. Ernst used it extensively during his stay in Sedona, in order to render the dramatic nature of the panorama he enjoyed from his home. In While the Earth sleeps it appears either pure, as in the triangle on the right edge of the composition, or mixed with other colours, in order to achieve the ochre that dominates the top part or the three layers, orange, pink, black-red, we see in bottom. Finally, it is reused for the three forms found in the blue part. But while everywhere it seems to signify the earth, here it is referring to blood, giving somehow life to these three forms.

If the creature in the centre seems to be left in a cellular state, the cells surrounding it indicate, with their round eyes, a more developed form of life. The figure on the right, in which we imagine a person in the form of triangles that make up a rhombus, may hide a genius outside the ordinary. As for the creature on the left, the mask-like structure, with two orange wings on each side, looks like Indian dolls. These very simple features are a discrete reference to the human form. In fact, we can speak of an abstract representation, where man, while shrinking to the very fundamental elements of his existence, eventually grows.