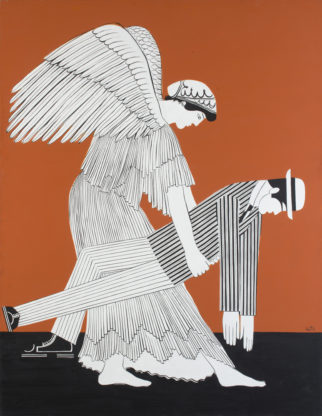 Descent from the Cross

Yannis Gaïtis’ work Descent from the Cross belongs to the series of works entitled Antiquities, which was exhibited at first in 1980, as a manifest against the commercialization of antiquities. The “little men” (as they are known to the general public) are actively involved in and take part in this action and stories, while they are often portrayed as guardians. In Descent from the Cross, the ancient Winged Victory is depicted linearly, maintaining some plasticity, as the tunic folds are rendered with rhythm and motion. In her hands she holds a dead “little man”, a rigid modern figurine with the perfection of a “robot”. The “little man” is proportionally much smaller than the Winged Victory, while its weight seems to pull it down.

Born in Athens in 1923, Yannis Gaïtis belongs to the post-war generation of artists who differentiated themselves in an ambiance where academism was still strong in Greece. Full of enthusiasm for modern art developments, he soon attained his personal expression. At first, he attended painting classes at the Athens School of Fine Arts having as teacher Constantinos Parthenis and following his graduation he left for Paris, where he stayed for twenty-two years. Despite this long period of time spent in Paris, he did not lose contact with Greece, where he was exhibiting his work occasionally; however, appreciation by Greek art lovers took long, since only few were those who perceived his special character and supported him.

The influence of pop art in Gaïtis’ work is obvious, even if the aim for him was not to render the characteristics of an over-consuming society but to create an easily understood narrative, with which he could criticize society and communicate his liberal views. He was concerned about the modern man of a city and the existential loneliness he or she was feeling. Thus, in 1960 he created his first “little man” with which he would become well-known to the general public. The little man became the symbol of his painting language: a male figure, featureless, in a striped or plaid suit, always wearing a tie and a hat. The same figure gradually multiplies, thus creating the “little men”, through which he criticized society often ironically, but always maintaining his humour.