Cylinder Decorated with a Representation of Hina

Paul Gauguin arrived in Tahiti in 1891, hoping to discover a place untouched by every trace of civilization. However, he found a society transformed by the arrival of settlers a century earlier: old idols and places of worship had been destroyed; women were wearing loose European-style clothes covering their whole body.

Apart from depicting the Tahitian fauna and flora or women of authentic beauty, without needing western embellishments, Gauguin would attempt to recreate the mythology of the area through his art. He took an interest in various figures of Maori religion, but ended up dealing more with Hina, the goddess of the moon and the air, a symbol of femininity and fertility. Everything he had learned about Hina was spread through all forms of his art: painting, writing and wood sculpture, to which he dedicated himself as soon as he arrived in Tahiti.

The artist carried out the Cylinder Decorated with a Representation of Hina probably in 1892. The goddess, in standing position, with her arms raised in W shape and a loose belt around her waist, is surrounded by two figures. Her “face-mask” is clearly reminiscent of Maori art, but it is not the case for the accessories (the necklace, the bracelet and the belt) or the position of the hands, being similar to a “life-giving gesture”, elements which refer more to Hindu sculpture.

Gauguin exhibited the Cylinder Decorated with a Representation of Hina in November 1893 along with some other small wood carvings. The plaster copy created in 1900 was used subsequently, in 1959, when the artist’s heirs gave permission to cast six bronze copies, one of which is presented here. 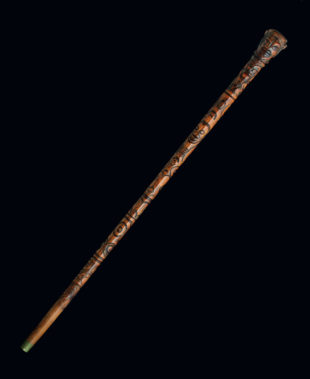 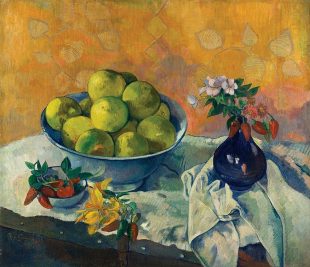