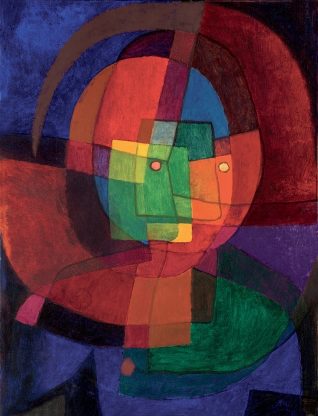 Dynamics of a Head

In April 1933, Paul Klee was fired from the Düsseldorf Academy, where he had been teaching painting for two years. All his works purchased from public museums were confiscated. In the eyes of the Nazis, who had risen to power three months earlier, Klee represented the quintessence of what they considered “degenerate art”. Following his wife’s insistence, he fled to Switzerland. In the tedious artistic environment of his hometown, Bern, he worked on a great variety of techniques and subjects. Also, he was constantly oscillating between abstraction and representation, dream and realism, poetry and irony.

In Dynamics of a Head, the painter expresses his interest in a facial reconstruction through the accumulation of geometric shapes. The painting stands out from similar paintings of that period thanks to colour. And it’s not about any colour: the basic ones, yellow, blue and red, laid one over the other, give the complementary ones, green, orange and violet. To them, is also added the black used for drawing the outlines. The predominant colour in the composition, red, is presented in hues ranging from the purest to the most blended, sometimes combined with blue and others with black. The eyes, one orange and the other yellow, appear with even greater vividness, thus expressing the artist’s clear intention to create a head. The viewer has only to contemplate in his own way in order to find the nose, the chin, the forehead, and the shoulders supporting the head. Therefore, Klee manages, with these two simple circles, to break the abstract character of the painting by introducing a more complex form of representation.

For Klee, colour has only one competitor, music. A talented violinist himself, he never ceased to incorporate the lessons he learned from music into his painting. The term “dynamics” in the title of the work, unusual in visual arts language, may refer to the world of music: dynamics, also called embellishment, indicates the range of sounds an instrument can reach, depending on what a musician wants to produce. Like colours, musical instruments need to be controlled by those using them, in order to deploy their potential. Therefore, “dynamics” could mean, in the case of this painting, not only the variations of the head, changing according to the viewer’s angle, but also the range of colours which, thanks to their intense hue, highlight the image. It also serves to create, by using the mind, the perspective of forms, which is not indicated by the use of shadows at all.