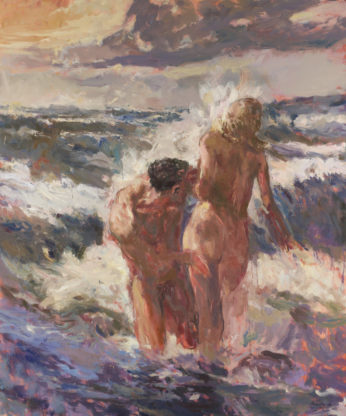 Couple in the Waves

Andreas Kontellis was born in Athens in 1966; with roots from Lemnos, a place he bears deep within and depicts endlessly on canvas, he studied painting at the Athens School of Fine Arts with Panayiotis Tetsis. During his studies he was recognised by the National Scholarships Foundation and later received a three-year scholarship to execute a specific painting project. On a scholarship from the Athens Academy, he received a Master’s degree from Middlesex University, London.

With intense expressionistic elements, drawing aptitude and rich colour pallet, Kontellis paints with both dynamism and tenderness, presenting experiences and impressions, senses and emotions. With the series of works “In the Waves” (1995-2000), Kontellis established himself as one of the youngest artists of Greek expressionism of the 1990s. The series is initially dominated by male figures in cold colour harmonies, which later give their place to couples. The dialogue between the bodies is expressed through a direct expressionistic dynamism, while the sea framework offers the pretext for an interesting formal negotiation which is not lacking in drama. Focusing on the emotional basis of his work Couple in the Waves, the artist himself has written:

“The couple, a commentary on love, resists, fights against its ambivalence and the hostile marine environment. I do not know if there is progress in the relationship one can have, while growing up, with the primeval mystery, the ephemeral and the absolutely real when it happens. The bodies in the work move ceremoniously and ecstatically. The desire of two people to be together, ignoring the specific framework, is a fundamental revolutionary act. The opposition of the environment creates the need for absolute freedom.

There is usually an initial vision for the final form of the work. The result is close but does not agree absolutely with this. During the painting process, at some point the work formulates, gains its own expressive discourse. Then it is finished.”

Exploring his painterly methods and subjects, Kontellis has exhibited his work in over twenty solo exhibitions in Greece and abroad, and his works are included in important collections. 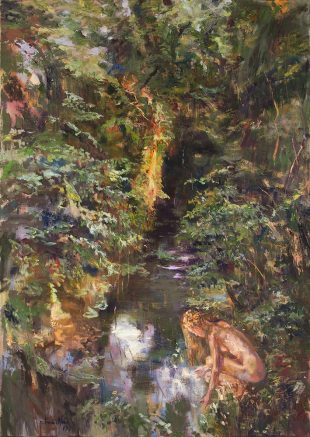