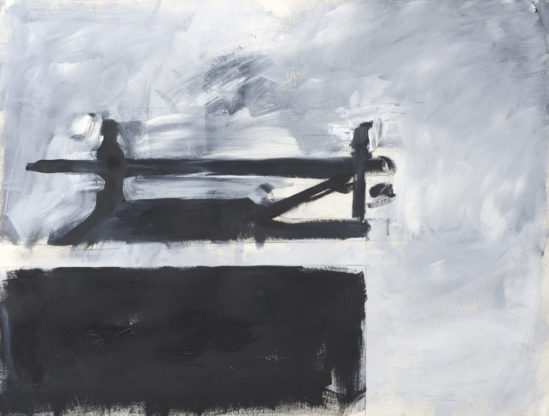 In the abstract work Untitledof our collection, created in 1983 by Jannis Kounellis, the human figure is absent, while finding form through black (main characteristic of Kounellis’ work) covers a large part of the composition that is in dialogue with the anguished rendering the surroundings, conveying us feelings through a poetic mood.

Jannis Kounellis was born in Piraeus in 1936 and at the age of 20, after failing to enter the Athens School of Fine Arts, settled in Rome. That city would be a huge source of inspiration for him, where he was initiated into painting and gained recognition following his first exhibition, before even graduating from the Academy of Fine Arts in Rome. When he was asked by a journalist why he had chosen Italy to study and settle there he replied: “Because the Renaissance, which flourished there, is the first step to understand the West, and this has to do with great freedom. And Greece exists in the Renaissance idea. It has man, motion, measure. It is the beginning of understanding the world”. Kounellis would be regarded by the Italians as a mature artist, and in 1967, with the exhibition Arte Povera e IM Spazio at La Bartesca Gallery in Genoa, he was listed as one of the leading figures in the Arte Povera movement.

The artist was widely recognized while living. He managed to pass through the most significant art centres such as Rome, Berlin, Paris, London, New York, Chicago, Moscow and many other major cities, with his name being one of the most important representatives of contemporary art. Kounellis’ work is multidimensional and throughout this journey through different geographical areas he developed his own unconventional artistic language, always in the context of contemporary art developments. The plastic vocabulary that originally appears as coded writing resulted in the creation of images from the recent industrial-urban past. His work stems mainly from personal experiences and is based on man and measure, always expressing a daring socio-political opinions which would mark his artistic career.