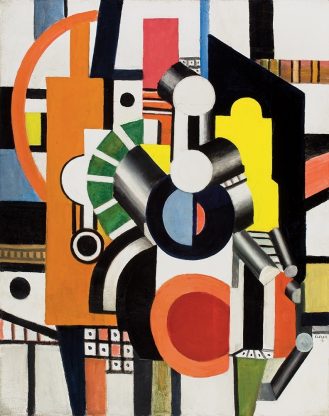 The experience of World War I, during which Fernand Léger served for three years with the French army, was pivotal for him both as a man and artist. Coming out of the war, due to the integrity and disobedience of his character, he did not hesitate either to express his joy of being alive or to speak loudly his admiration for the industrialization, which many deemed as responsible for the hundreds of casualties of that war.

From 1918, he had been increasingly playing with contrasts in his works, both in colours and shapes. He did not hesitate to use the basic and complementary colours without shades, making them co-exist with black, white and all possible tints of grey. He made straight lines collide with curves and flat shapes with forms transformed like sculpted ones. He also played with perspective, thus enjoying the balance he created between representation and abstraction.

Soon after, the world of machines would dominate Léger’s interest: engines, propellers, watches, pistons became his favourite subjects. In a more general sense, he was interested in the city and its factories: symbols of technological progress for him. Gradually, everything in his painting was done mechanically. It is no longer a question of trying to identify what kind of component or machine is depicted. The “mechanical elements”, as he called them from that point forward, became the main characters of his works, enlivening his painting until 1925.

In our Mechanical element, which looks as if it has been captured in a moment of creative elevation, we have disks and cylinders, while the roundness of the decorative elements is combined with the cold perfection of metal. The two diagonals crossing the canvas urge us to think that a human-like form emerges from the centre of the composition. A head seems to come out of a white circle, with the rest of the body starting from two hands and two legs cross-shaped. The painter does not give us any evidence to confirm or prove wrong this impression. He only seems to be concerned about his intention of elements, a priori incompatible with one another, coexisting on the same surface.

Léger, expressing in every possible way his love of the modern industry forms, seems to have managed, with his palette alone, to breathe life into these lifeless objects and to give colour the noblest possible role: that of a “life creator”. In no way can we talk about dehumanizing art. On the contrary, we stand in front of an outburst of life that manages to penetrate even the objects.