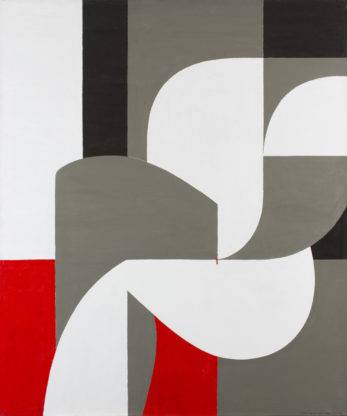 Erotics, one of the most popular section of works by Yannis Moralis, although spanning chronologically over a period of almost 30 years, seems to have been created at the same time. Starting in the mid-1970s and reaching the end of the painter's artistic career, these works seem to be governed by a common inspiration, coming from the female figures that always inspired the artist’s work.

The colour surfaces are graphically treated with a strictly limited colour palette, while the freedom of absolute abstract expression covers the most extreme sexual encounters. Geometry and contrasting curves create an abstract composition, which refers largely to the ancient Cycladic art and primitive sensuality.

Yannis Moralis was born in Arta in 1916 and was raised under the strict supervision of his father, who had made sure that his son would receive classical education. Very soon, at the age of 15 years old, he was enrolled at the Athens School of Fine Arts and attended painting courses having as teacher Constantinos Parthenis, as well as engraving courses with Yannis Kefalinos. He received many awards and praises for his diligence and outstanding performance, both in painting and engraving. His father’s death, for whom he had a great respect since he was child, in 1936, shocked him. During the same period, he won a scholarship and travelled first to Rome and then to Paris, where he attended painting classes at the École Superieure des Beaux Arts and mosaic classes at the École des Arts Metiers. In these two cities, he was acquainted with the most important works of the Renaissance and contemporary European painting as well, an experience that would help him to form an extremely personal artistic language, maintaining however elements of the realistic Greek painting tradition. After the outbreak of the World War II, he abandoned his studies and returned to Greece.

Human figure, especially the female one, dominated his works from 1940 to 1972. In 1947, he was appointed professor of the preparatory class at the Athens School of Fine Arts and in 1957 he was promoted to full painting professor, a position he occupied until 1982.

Moralis’ work never ceases to evolve and witnesses a series of disclosures and experiments, extending beyond painting, to costume and theatre sets design, decoration, applied arts, book illustration, and disc covers. His fondness, since his school years, for Fayum mummy portraits dating back to Hellenistic era, Pompeii painting, church mosaics and Byzantine painting, had an impact on forming his emotional world as well as his work, in which those experiences, memories and knowledge are always visible. 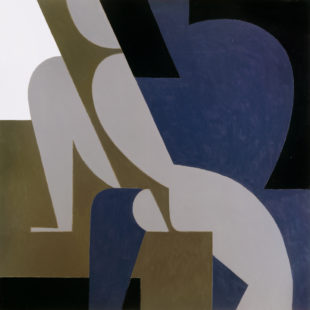