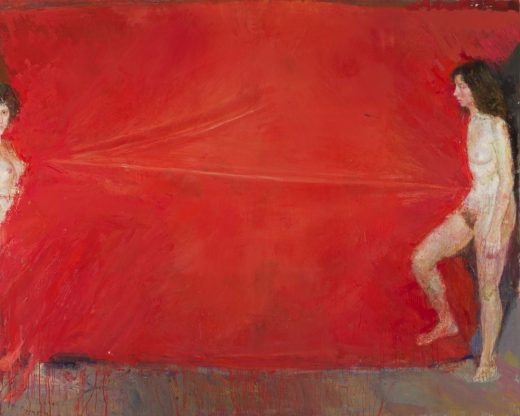 George Rorris was born in 1963 in Kosmas, Cynuria, where he completed secondary education. He moved to Athens where he studied at the School of Fine Arts with Panayiotis Tetsis and Yannis Valavanidis, while in 1988 he embarked on post-graduate studies in Paris at the École Nationale Supérieure des Beax-Arts, on a scholarship from the Basil and Elise Goulandris Foundation and the Bakalas Bros Foundation. He belongs to the generation of painters of the 1980s who turned to representation and realism. His painting, with an emphasis on people and mainly the female figure, desires a psychogram, a dialogue between painter and model.

Large Study in Cadmium Red is an early work, influenced by El Greco’s masterpiece El Espolio, the work of Mark Rothko as a whole, but also by Chronis Botsoglou, who had spoken of the brightness of the colour red which is, in essence, a dark colour. This reference was what motivated Rorris to embark on a work which would depict a bright red as this resonated in his mind.

The artist himself has described among others: “In the beginning, the forms dominated. The cloth was their background. Gradually however, the latter absorbed all my energy in my effort to brighten and unify it. […] Days, weeks passed but the long-desired unity was non-existent. A group of separate red stains remained and showed me my weakness. After numerous attempts, I took the decision not to look at my subject. I almost knew it by heart. I laid the canvas on the floor and took a straw broom which, like a giant paintbrush, destroyed the stains and created a certain unity. I called Tetsis who, when he came and saw, suggested I rub out the figure on the left; the well-known method of abstraction which has since become my guide and compass at difficult moments. But then, it was very difficult. The nude had been painted at pains and I was sad to annihilate it just like that... More days passed until I took the decision and then, as the viewer can easily ascertain, the nude was regarded as the enemy, with rage. The paintbrush, with pleasure and fury, concealed everything which hindered the red cloth from exploding. Its brightness however had tarnished, had faded. I laid it back down on the floor and then, using a clean red, in liquid form, began to ‘imbue’ the work and spread this transparent red with the broom. […] In the end, I felt a liveliness jumping off this surface and then the work was complete.” 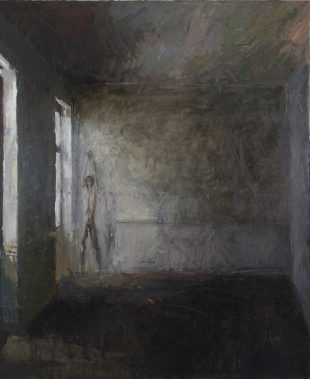 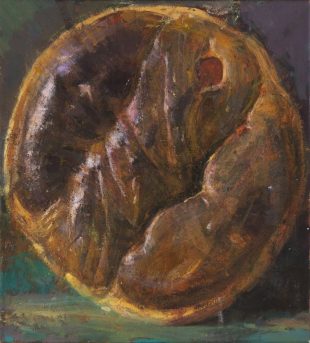 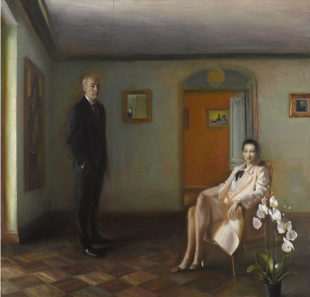