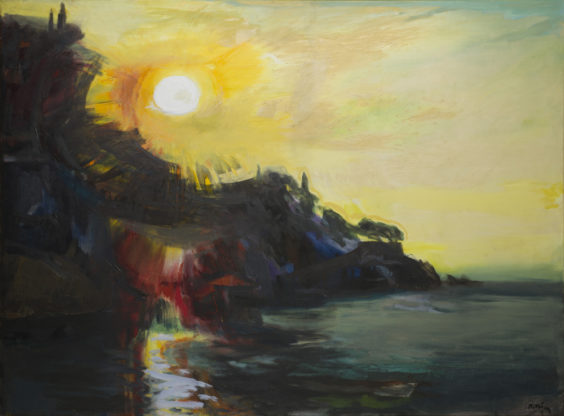 In the work of our collection Hydra, Sunset the work itself urges us to talk more about poetry in Tetsis’ painting, an aggressive poetry. It is a sunset rendered through a pictorial space so energetic that touches us. The painter himself wrote: “I want to express my homeland. It is here that I was born, that I was raised, my eyes, the light flowing into the Greek land […]”.

Panayiotis Tetsis was born on the island of Hydra in 1925, during the interwar years, a difficult period for the island, which he described it as “decaying”. His family was forced to move to Piraeus due to financial difficulties, but Tetsis would continue to spend his summers in Hydra, where, from an early age, he began to deal in painting.

In his early works one can observe an almost cubist simplicity and desire to design. His encounter with Dimitris Pikionis, Nikos Hadjikyriakos-Ghika, as well as the German painter Klaus Vrieslander, whom he called teacher, was not a mere coincidence at all. Admittedly, he initiated him in a simple and understandable way into the problems of painting, into forms and composition and brought him into contact with the art of El Greco, Cézanne and the Impressionists. He was enrolled at the Athens School of Fine Arts, having as Professor Parthenis, whose work impressed him; however, his apprenticeship next to him would last for a very short time, as the difficulties that led Parthenis to resign at that time had already appeared. In 1953, thanks to a scholarship offered by the State Scholarships Foundation, he continued his studies in Paris and for the next three and a half years the French capital would open a new “window of knowledge” for the painter. He was inspired by the great masters of the Renaissance, whose works was admiring in the museums he was visiting, but also by the new movements he encountered in galleries, which were flourishing at the time. All this experience helped him to seek his own “artistic voice”.

Tetsis is a painter of “the gaze”, that is to say he sought poetic ways to share with us what had seen through the dialogue of colour with the Greek light. He struggled, one might say, to render in his compositions this rich colour that loses power and fades away under the bright Greek light. His compositions are very well organized, yet his painting is not descriptive or imitative; on the contrary, he was rather trying to balance reality through abstraction.