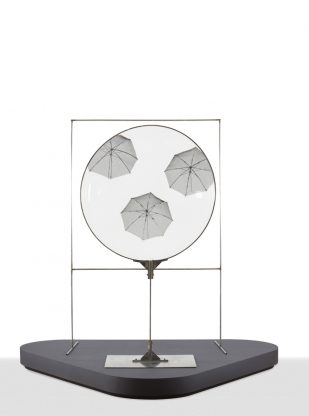 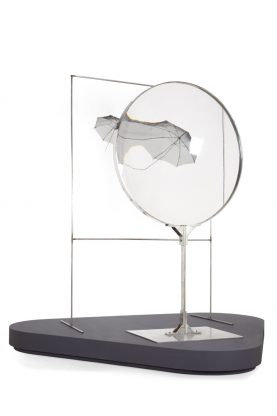 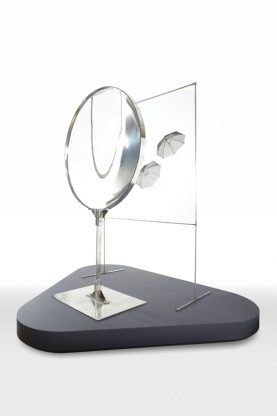 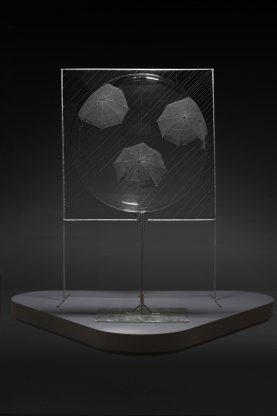 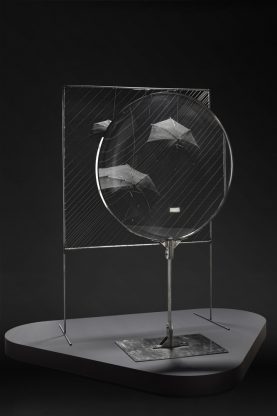 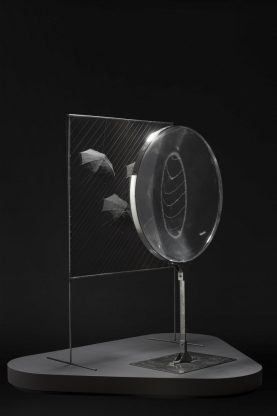 George Zongolopoulos was born in Athens in 1903 and lived through the historical developments of an entire century. In 1930, he completed his studies at the sculpture department of the Athens School of Fine Arts and also attended architecture classes, a field which he found particularly inspiring. Several years later, on scholarships, he continued his education in France and Italy, countries that greatly influenced his artistic evolution.

Initially, his sculptural and painted works were largely representational, only to evolve – mainly after his later education – and integrate into the modern movements of his time. His creations approached abstraction, while he continuously refreshed his forms and materials and their relationship with space. He explored movement in relation to light, water, and gravity, through constructions made of large magnifying glasses, stainless steel and Plexiglas. He wrote about the work Lens with Three Umbrellas: “Through the lens, objects lose their real dimensions. Thus, their unexpected enlargement, this visual game, creates a new imaginary object”.

His work in the public landscape is characteristic; many of his works, often monumental in dimensions, adorn many Greek, and not only, cities. Omonia Square, as it was constructed in the 1960s, the Zalongo monument on the top of a cliff on the mountain by the same name, the Umbrellas at Syntagma metro station and on the New Seafront in Thessaloniki, as well as his hydro-kinetic sculpture outside the European Union Council of Ministers building in Brussels, are only some of the artist’s interventions in the public landscape.

Zongolopoulos received numerous distinctions both in Greece and abroad, participated in the Venice Biennale many times and was an active member of many artistic groups. A free spirit, he sought innovation constantly until the last day of his life.