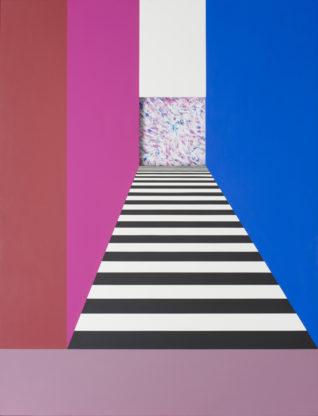 Opy Zouni’s work Ascent to Square created in 1984 belongs to the geometric abstraction movement. The intense perspective is not interrupted, as it is usually the case in her works. The colour surfaces are quite intense and space, which could continue off the canvas, can be both imaginary and real.

Opy Zouni was born in 1941 in Cairo, Egypt. There, she began to study painting, ceramics and photography and later, in 1963, she travelled to Greece to expand her knowledge at the School of Fine Arts, having as teacher Yannis Moralis. She drew inspiration on and studied in depth geometry through ancient Greek and Egyptian art. As she said: “These two civilizations are characterized by a geometric structure and thinking”. Thus, geometry would act as the artist’s missing link to the environment and her sensibilities.

Much of her work is focused on three-dimensional paintings with intense scenery, where light and shadow are rendered through colour surfaces, while depth, perspective, and the notion of hallucination and optical illusion are rendered based on an architecturally structured, yet dreamy space. Also, a large part of her study and experimentation is dedicated to light, resulting in the transition to sculpture and construction. “Geometry is the means, not the end in itself”, she pointed out. And she continued: “I pose a question to myself, a geometrical problem, in order to realize a vision. In my mind there is always an idea, not a theory”.