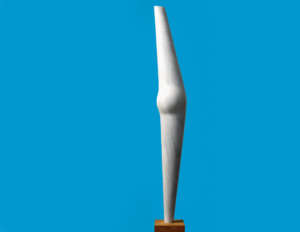 Between East and West

Between East and West

“I find myself a wanderer in a world rapidly growing smaller”

This was the first time that Noguchi’s work is being presented in Greece. The exhibition was held at the Museum of Contemporary Art, Andros and featured a total of 76 works, including 42 sculptures, 34 drawings and preliminary sketches and a series of photographs documenting stage sets designed by the artist for various performances, as well as public works realized across Europe, Asia and the U. S.

Isamu Noguchi’s contribution to contemporary sculpture and design is immeasurable. An artist of dual heritage (his mother was American and his father –a poet– was Japanese), Noguchi was introduced to Greece and Greek culture by his mother, Leonie Gilmour, who read classic Greek mythology to her young son. Later on he would visit Greece on many occasions and would always express nothing but respect and admiration for the masterpieces of classical sculpture.

Noguchi travelled extensively throughout his life. In Mexico he discovered the beauty of large-scale works; in Japan he was initiated into the art of pottery and the harmony of the Japanese garden; China unfolded the mysteries of India ink and Italy introduced him to the clarity of marble. His practice assimilated many different methods and rested on continuous experimentation with a variety of materials, such as steel and marble, iron, wood and bronze, aluminum, basalt and granite. Even the elements themselves –water, air, earth and fire– were to Noguchi potential materials to be used in large-scale works.

Noguchi’s acquaintance with the sculpture of Constantin Brancusi (1876-1957) at a 1926 exhibition in New York marks one of the turning points in his life. He would spend two years in Paris (1927-1929) after securing a John Simon Guggenheim Fellowship and work as an assistant at Brancusi’s studio for a period of six months.

Because of his dual ancestry, Noguchi often found himself caught ‘in between’ East and West, as in the wake of the Japanese attack on Pearl Harbor on December 7, 1941 and the drop of the atomic bomb on Hiroshima that followed. Emotionally torn, yet acutely sensitive to the political realities of his time, Noguchi responded to the attacks by proposing two works, Monument to Heroes and Memorial to the Dead of Hiroshima (1952), both of which would remain unrealized. Nevertheless, in 1951 he was commissioned to design two bridge railings for Hiroshima’s Peace Park.

Noguchi drew on a diversity of elements in his sculpture: Brancusi’s abstraction and ancient Greek sculpture had as decisive an influence on his practice as Surrealist biomorphism and the art of calligraphy. Though he collaborated with many artists representing various “schools” and working with different media, he never aligned with a specific art movement.

His art was pioneering in many respects – he created ‘environmental art’ and ‘land art’ almost three decades before the terms were properly introduced into the vocabulary of art in the 1960s.

His architectural designs for gardens and playgrounds offer a new vision of landscape architecture, which is decidedly contemporary and informed by environmental concerns, while his stage designs for avant-garde dance performances are without parallel in the history of modern dance. Noguchi’s stage-designing activity in fact goes back to 1935, the year when he begins his long collaboration with internationally acclaimed choreographer Martha Graham. Apart from Graham, he would also work with Merce Cunningham, Erick Hawkins and George Balanchine, as well as with composer John Cage.

Stone carver Masatoshi Izumi, architect Louis Kahn, and designer and inventor Buckminster Fuller are among those with whom the artist collaborated in many of his most well-known projects.

Noguchi made several important contributions to contemporary design. His highly sculptural Akari lamps (Aakari being the Japanese word for light) and famous glass-topped table, originally manufactured by the Herman Miller furniture company, are only two among the many well-known utility objects designed by the artist in the 40s and 50s and continuing to be mass produced today.

Noguchi himself designed and founded the museum that would shelter his works. The Isamu Noguchi Garden Museum (known today as The Noguchi Museum) opened in 1985, in Long Island City, New York.

The first Noguchi retrospective was held in 1968, at the Whitney Museum of American Art, New York. In 1986, Noguchi represented the United States at the 42nd Venice Biennial, and in 2004, Isamu Noguchi: Master Sculptor, a major centennial exhibition, opened at the Whitney Museum prior to traveling to the Hirshhorn Museum and Sculpture Garden, in Washington DC.

He was fortunate enough to see his work recognized in his lifetime and to be honored with a number of prestigious awards, including the Kyoto Prize, presented by the Inamori Foundation, Japan, for his lifelong contribution (1986); the National Medal of Arts (1987) and the Third Order of the Sacred Treasure (1988).

This “world traveler”, as he has been aptly termed, died in New York, in 1988, of pneumonia.

Isamu Noguchi, Between East and West

[…] The movement in the Basil & Elise Goulandris Foundation is dense. There are no tourists, mainly Greeks are those who decide to visit the show “Isamu Noguchi: Between East and West”. Initially, those that are not familiar with the artist have a certain reservation. But from the very start of their wandering through the exhibition all objections vanish, the enchantment overpowers. An exhibition with a specific philosophy, scientific installation and very interesting material […].

[…] The exhibition of the Japanese-American sculptor and set-designer Isamu Noguchi situates contemporary visual art in relation to elements from the traditional Japanese aesthetics, through the sculptures, drawings and photographs of the artist […].

[…] All the myths of Apollo that his mother read to the young Noguchi nurtured this well-thought grandeur of a simple, dynamic, mystical and bounded work, […]. Noguchi wouldn’t imagine a place more Greek for his art to be exhibited. […]

[…] Entering the space of the museum you immediately feel the lingering displays embrace you, make you confront the fragments of the artist’s life. Learning his story makes you think that by gently scratching the surface of the exhibits you will reveal all the anguish of the exile, of the rejection, of the familiar and the alien […]

[…] Sailors talk about a place in the middle of the ocean where the moon and the sun co-exist. This point of co-existence was the object of the life-long quest of Japanese sculptor Isamu Noguchi. The place where an artist doesn’t need to serve form or concept, doesn’t need to follow facts or adjust to circumstances […].

[…] His work expands to aesthetic and cultural paths that include the Japanese, the French, as well as the American culture. His works are characterized by a sense of naturalness, simplicity and lucidity. His sculpture is both real and irresolute. Isamu Noguchi is not an ordinary artist. His art incarnated the vision of serene beauty, while, at the same time, he endeavored changes that placed art within the social sphere. This homage at the Museum of Contemporary Art in Andros attests to the eternal significance of simple things. […]

[…] He was an artist of essence, of congealment. Approaching the port of Andros and suddenly viewing the landscape, the rocks and the numerous perched little temples, gazing onto eternity, got me thinking how appropriate is such an exhibition for our Cycladic island […]. 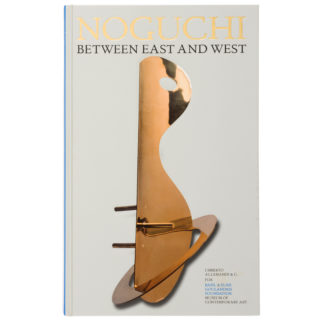 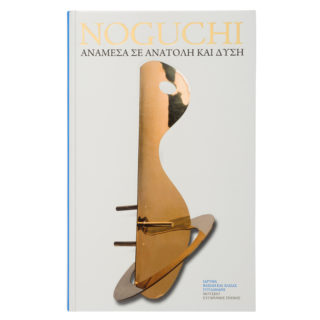