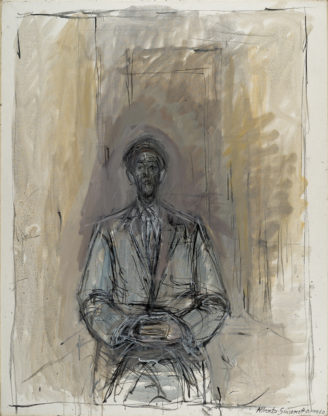 In 1955, Alberto Giacometti befriended Isaku Yanaihara, a Japanese philosophy professor who was in Paris at the time. From the first moment the two men communicated excellently and shared many interests, such as French literature and philosophy, especially existentialism. The following year the painter suggested Yanaihara to paint his portrait, and he accepted.

Posing meetings, which were supposed to last a few weeks, were prolonged for many months. Giacometti seemed to result in a dead-end. He failed to render in his friend’s portrait what the latter wanted to see and immersed into a general doubt. In addition, the fact that Annette, Giacometti’s wife, and Yanaihara became lovers may have contributed to his confusion. When Yanaihara informed Giacometti that he had to return to Japan, the artist asked him to come back the soonest possible in order to begin posing again. The philosophy professor travelled to France four times, until the love triangle with the painter and his wife resulted in a rupture. However, their collaboration was quite fruitful: almost twelve paintings and a sculpture were carried out.

At first glance, Yanaihara’s portraits are a little different. In all he is depicted with a neutral expression on the face, sitting, arms crossed, in frontal position, in the centre of a composition dominated by grey. Only the framing changes in each version, depending on whether it is cut in the chest or waist. This colour domination is not unpleasant to the viewer. Like Giacometti’s sculpted figures, having the same filamentous silhouette in common, thus grey, slightly tinted with brown or black, strips the composition of any unnecessary element and depicts the model exactly as it is, authentic, almost naked. Some even refer to “a metaphysical colour, corresponding to the golden background of Byzantine painting, [which] surrounds Yanaihara’s head, like the halo around the heads of the saints or Christ”.

Reference to Christian iconography, which may seem incompatible when used for a Japanese, is quite relevant. This is because Yanaihara, as he is portrayed almost drowned on the grey void dominating the composition and hardly breaks some lines that indicate a frame, does not cease to appear straightforward, honest and mainly alive. The head, worked with infinite meticulousness, however tiny may seem to be compared to the rest of the body, never ceases to be the key element of the painting, similar to the hymn of human existence in front of the void. This is perhaps the description that best fits Giacometti’s entire work: an art showing human existence at the same time fragile and in all its sacredness. 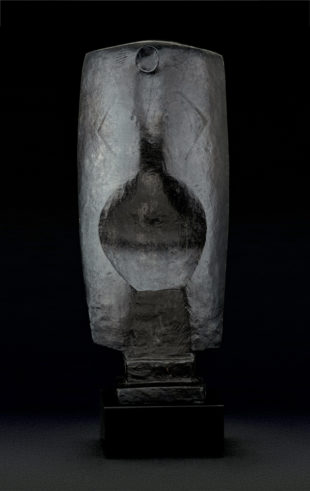