Portrait of a Man

Watercolour and gouache on paper

Having passed his childhood and adolescence in Greece, Giorgio de Chirico settled in 1906 with his mother in Munich, where he was admitted to the Academy of Fine Arts. There, he was deeply marked by Nietzsche’s symbolism and philosophy. His eyes, having absorbed the Greek light, were defined by this classical aesthetic, while his mind opened to a new form of thought. This apprenticeship was naturally reflected in his early paintings.

When he painted this Portrait of a Man, Giorgio de Chirico was only 19 years old. However, all these new sources of inspiration are already perceivable on this tiny oil painting: the mastery of chiaroscuro, the dramatic way in which the face emerges, the romantic realism of this young figure, determined but concerned at the same time. The long narrow nose, enhanced with white colour, could remind one of a self-portrait. But, regardless of this man’s identity, there is only one thing that matters: his appearance, which seems both fleeting and blazing, is an assertion of his being, a paradoxically subtle and theatrical way of putting in an appearance a society still unaware of his existence.

Despite his young age, De Chirico proves here his technical expertise. With a particularly limited palette, he revealed the skin and hair of his model by a simple variation of the same pigment and highlighted a shirt collar with a single white brush stroke. This frugality in the means used, instead of diminishing this spectral side, makes the work even more spectacular. We stand before a work full of promises that the rest of De Chirico’s itinerary would only confirm. 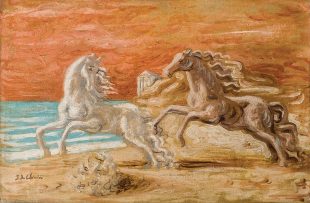 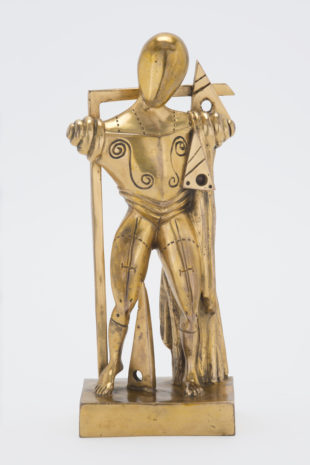