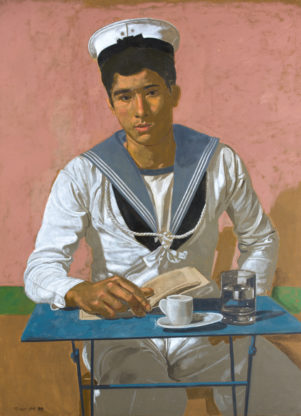 Oil on canvas laid down on board

Υannis Tsarouchis is one of the most recognized Greek artists and his work holds a significant place in the history of modern Greek art.

Barely at the age of six, he designed theatre costumes, while his work is plenty of the influences of his childhood: the karagiozis shadow theatre, the neoclassical buildings, and later his pursuits with references to Byzantium, the ancient Greek culture and, as he mentioned, the ancient classical ideal, as expressed by the Renaissance and the Baroque.

Eroticism, which is presented without implications, very often dominates his works, shifting the blame from any form of taboo of the time. Sailors are a favourite subject of the painter. In Yiannis Tsarouchis’ work entitled Sailor Sitting at the Table, Pink Background, light and colour are stand-alone in the composition, while the context is not just a painted background, but a living space surrounding the sailor, who occupies the largest part in the composition.

Tsarouchis studied at the Athens School of Fine Arts until 1933 and subsequently, travelled to Paris and Rome, where he was influenced by the movement of Impressionism and the Renaissance.

His work was regarded with high esteem by the Greek public, while at the same time it was recognized abroad. In 1958 he took part in the Venice Biennale and throughout his creative career he participated in numerous exhibitions both in Greece and abroad.