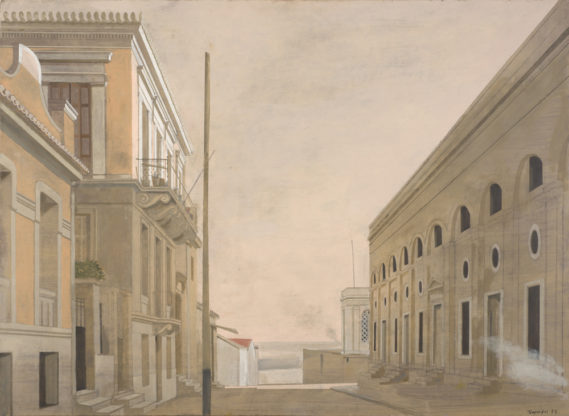 The Old Customs Warehouse of Piraeus

Υannis Tsarouchis is one of the most recognized Greek artists and his work holds a significant place in the history of modern Greek art.

Born in Piraeus in 1910, he lived his early years in neoclassical residences, which would set their mark on his memories and became one of his favourite themes. “[...] For me home meant only a neoclassical building [...]” he mentioned in one of his texts, and then, referring again to the neoclassical houses, he added: “[...] Later, when they started tearing them down one by one, I felt my life was dismantled. What I felt was more than an aesthetic protest […]”.

In Yiannis Tsarouchis’ work entitled The Old Customs Warehouse of Piraeus, the painter tries to render the light and the buildings, treated with great consistency and vividness, through a childish look. The absence of human figures, aiming to capture the isolated urban landscape, takes us to a rather metaphysical ambiance. In fact, he wrote: “To go for a walk in Piraeus at that time was like strolling in a gigantic stage set with rocks and fine houses adorned with statues and pediments. When I once saw in a French book the picture of a landscape by Claude Lorrain, I asked if it was Piraeus in the past.”

Tsarouchis studied at the Athens School of Fine Arts until 1933 and subsequently, travelled to Paris and Rome, where he was influenced by the movement of Impressionism and the Renaissance.

His work was regarded with high esteem by the Greek public, while at the same time it was recognized abroad. In 1958 he took part in the Venice Biennale and throughout his creative career he participated in numerous exhibitions both in Greece and abroad. 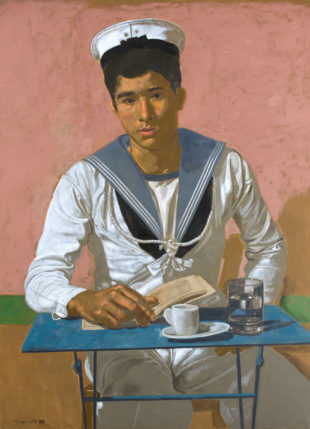